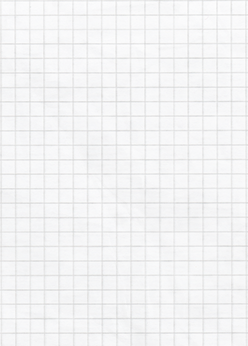 I. Definition of Alcoholism

「Alcoholism」: In general, Alcoholism is defined when someone uses alcohol excessively without self-restraint, which may lead to impairment on cognitive, behavioral, physical, social or interpersonal relationships. 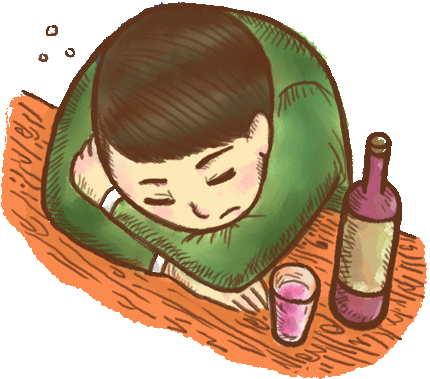 Alcohol has both short-term and long-term effects on your health. According to the World Health Organization, the harmful use of alcohol is a key risk factor for premature death and disability in the world. Alcohol causes serious diseases as well as economic and social burdens in societies. 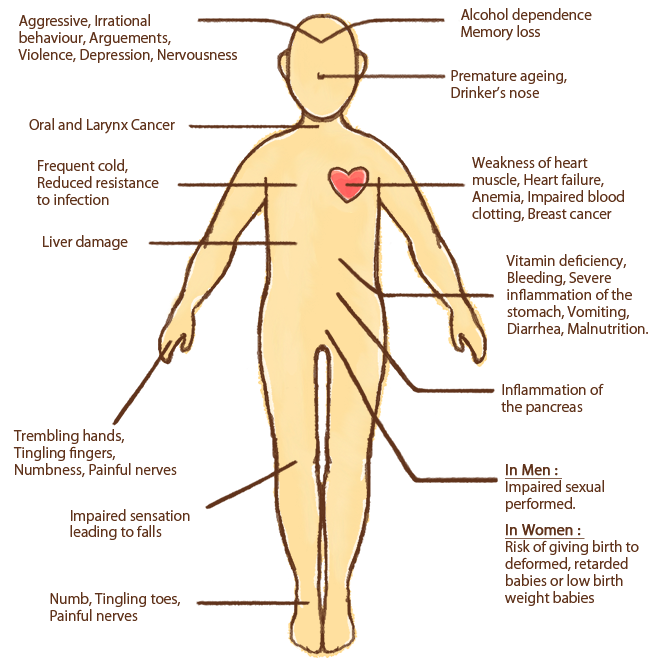 How many calories are you drinking?
Drunkenness can affect nutrient absorption, leading to deficiency in Vitamins B1, B2, B6 etc., it can also lead to weight. Alcohol does not have any nutrition value and each gram of pure alcohol carries 7 kcal. Drinking 1 can of 330ml beer will absorb 142 Kcal, which equal to 3/4 bowl of rice. As the body cannot store alcohol, the alcohol becomes priority in the metabolic process. Your body will not metabolize other fats and sugars as efficiently, which lead to weight gain.

The liver can only handle a certain amount of alcohol at any given time, so if you drink more than the liver can deal with, your liver cells struggle to process it. Regular and heavy drinking over time can strain the way alcohol is metabolized within the body, which can lead to fatty liver disease. If you have fatty liver and continue to drink, you are dramatically increasing your chances of developing alcoholic hepatitis or cirrhosis. Alcoholic liver disease can lead to liver cancer. It’s best not to drink any alcohol at all if you have any liver disease.

In Hong Kong, it is convenient to buy alcoholic beverages. There are different factors which contribute to alcohol addiction.

Genetic factors：Many scientific studies have shown that various genetic factors influence alcoholism. Children of alcoholics are four times more likely compared with the general population to develop alcohol problems. They also have a higher risk for many other behavioral and emotional problems.

Psychological and behavioral factors：Many alcoholics drink alcohol to improve their moods and to escape problems they are facing with. Research also shows that the risk for alcoholism is higher for people who begin to drink at an early age. Therefore, it is important to avoid underage drinking.

Peer influence：Some people begin drinking casually and later develop habits which make them drink at most social functions. Peer pressure also leads to maintain or start their abuse of alcohol. Some people enjoy the attention they get when they drink and brag about holding their liquor. This leads them to develop constant drinking habits and become an alcoholic.

Socio-cultural factors：When a culture accepts or celebrates being drunk, people are more vulnerable to addiction. This culture is passed on from one generation to the next.

Other factors：International researches show that people who experience one addiction have a higher risk of suffering multiple addictions. 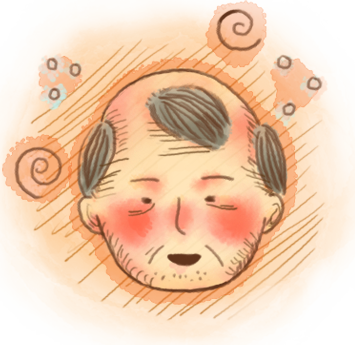 According to Road Traffic Ordinance (Chapter 374, Section 39A), a person who drives or attempts to drive a motor vehicle, or is in charge of a motor vehicle, on any road with the proportion of alcohol in his breath, blood or urine exceeding the prescribed limit, commits an offence .

With effect from 1 October 1999, the prescribed limit is set：

50 milligrams of alcohol per 100ml of blood; or

22 micrograms of alcohol per 100ml of breath; or

67 milligrams of alcohol per 100ml of urine

Any driver found exceeding the prescribed limit may face prosecution under the law:

(b) An official order to join a driving improvement course

With effect from 2 February 2009, a police officer in uniform may require any person who is driving or attempting to drive, or is in charge of, a motor vehicle on a road to provide a specimen of breath for a screening breath test. On conviction on indictment to a fine maximum fine of HK$25,000 and imprisonment for 3 years.

For more information about relevant legislation and penalties for drunk driving, please visit the website below.

Policies on the availability of alcohol

According to the Dutiable Commodities (Liquor) Regulations (Cap. 109B), the sale of liquor is prohibited, except on the authority of a liquor license or a temporary liquor license at any premises for consumption on those premises, a place of public entertainment or a public occasion for consumption on at the place or occasion. The regulations also stipulates that only the holder of a liquor license shall be allowed to sell liquor on appropriate premises and no licensee shall permit any person under the age of 18 years to drink any intoxicating liquor on any licensed premises.

The minimum disqualification periods for the following drink-driving related offences are set at “Tier 3”:
(a) Driving a motor vehicle under the influence of drink or drugs to such extent that is incapable of proper control of vehicles;
(b) Failure to provide specimens of breath for screening breath tests without reasonable excuse; or
(c) Failure to provide specimens of breath, blood or urine for analysis without reasonable excuse.

Do you really understand alcohol drinking? Do you know about the following myths and fallacies?

Myth 1：Drinking is not addictive

Truth 1：Alcohol itself is an addictive substance. When the body adapts to the alcohol, the alcohol effects will be reduced. People will begin to appear "tolerance" and need to drink greater amounts of alcohol progressively in order to reach the same effect. This finally leads to alcoholism.

Truth 2：Alcohol is a central nervous system depressant. This drowses people into sleep and is completely different from a normal biological sleep pattern by “compelling” you to sleep with alcohol. Alcohol disturbs the normal brain mechanism, if taken for a long period, alcohol makes the brain more aroused in order to balance the depressive effects of alcohol and this makes it more challenging to sleep as well as having poor sleep quality. In addition, alcohol increases your urge to pass urine more than often at night. Do not use alcohol to deal with your sleeping problems.

Truth 3：People who have alcohol flushes when drinking alcohol is primarily due to an inherited lack of acetaldehyde dehydrogenase, leading to acetaldehyde getting accumulated in the body. Having a red face in fact is a signal of alcohol poisoning

Myth 4：Drinking beer can be a thirst quencher

Truth 4：Alcohol increases the elimination of water in these kidneys which will make you feel thirstier and the chance of getting a heat stroke will be also increased.

Truth 5：There is no scientific evidence that can confirm hangover pills can lead to the decomposition of alcohol and guarantee the effects of alcohol will be gone.

Truth 6：It is controversial whether moderate drinking is good for our heart and the International Agency for Research on Cancer of World Health Organization has classified alcoholic beverages as Group 1 Carcinogen, the same grouping as tobacco.There is no safe level of exposure to any cancer-causing agent.

*There is no safe or harmless level for drinking alcoholic beverages. Complete abstinence is the goal

Every drinker should understand the measure of a "unit of alcohol” in order to monitor and limit the amount you drink. Different brands and types of beverages vary in their actual alcohol content and drink volume. You can use the following formula to calculate the number of "units of alcohol" you have consumed.

* Alcohol content is printed on the label of the container. According to the guideline of the Department of Health, one "unit of alcohol" contains 10g of pure alcohol.

If you choose to drink alcoholic beverages, we suggest you to:

- Not drink alcohol for at least two days per week

- Not drink alcohol for at least 48 hours after heavy drinking 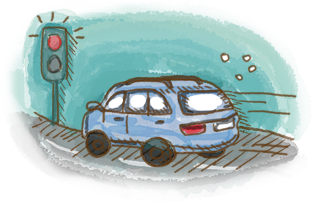 Steve aged 40, married and not yet has any child. He met his wife when he was working in China. Later, they got married and his wife applied for the right of abode in the HKSAR.

Steve developed his drinking habit when he was young and he had been drinking for more than 20 years. He even joked that there was no difference between blood and alcohol. He used to drink with his colleagues and clients 3-4 times per week. He drank more than 20 cans of beer each time. He changed to consume red wine in these few years, 3 bottles per day. Although Steve has seldom attended social intercourse in recent years, he cannot change his habit of abusing alcohol. He always drank at home and claimed that he cannot sleep without alcohol.

Steve’s wife started to complain about his drinking problems after she resided in HK for a few months. Tension is mounting. Steve always gets drunk and pees in the living room or bedroom, sometimes even thrust his wife. In the past few months, they had poor relationship with each other. Steve said that he did increase the amount of alcohol to release pressure and help him to get into sleep. However, Steve started to discover that alcohol cannot help him to solve the problems he is facing with. In contrast, alcohol affected his health. Steve finally decided to seek help from our services. 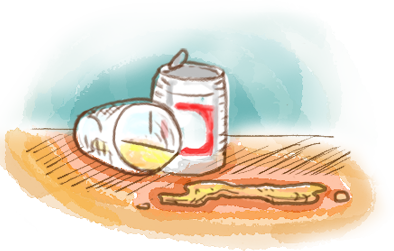 Steve’s drinking problem already enmeshed with the couple relationship. He felt lots of pressure in his relationship. He chose to abuse alcohol and keep silence when his wife complained and blamed him. He thought that being silence can help to protect their marriage. He did not know that it made his wife felt not being respected and listened which turn out worsen their relationship and pushed each other away, finally led to a vicious cycle.

Steve and his wife always blamed each other when they attend counselling initially. They thought that it was not their responsibilities, but other side. Later, Steve started to understand his wife’s discomfort and suspicion. His wife also understands more about why Steve chooses to abuse alcohol and the difficulties that he is facing when cutting down the consumption of the alcohol. They both realized that abusing alcohol is not an effective way to tackle the relationship problems. They started to set up a treatment plan that both agree and willing to take action.

Steve’s story told us that caregivers play an important role when helping alcohol abusers to stop drinking. It is important not to only focus on the drinking problems and not to stay negative when dealing with the addict. It may only increase their guilty feeling and push them further into drinking. To care instead of blame, invite your partner to recall the past intimacy so as to attain the best outcomes. 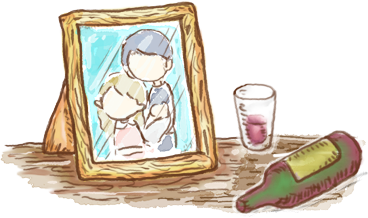